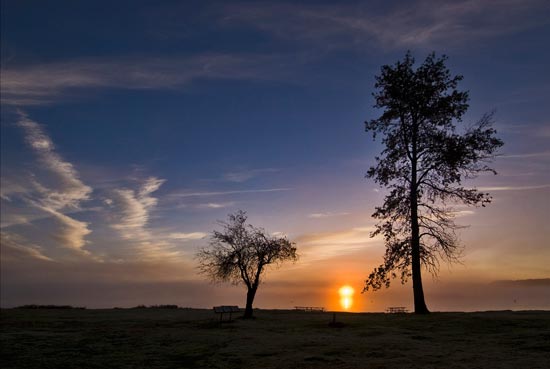 My home has a distinct photographer’s advantage. I have an expansive view looking east, which means I have a good idea what the weather will be like from the first signs of pre-dawn light. I also see great sunrises, though I rarely photograph them from my house because of the trees and powerlines that hinder the view. I love trees, but sometimes they’re just in the wrong place. Except for some trees, for example, I’d be able to see Mount Rainier from the office in which I sit writing this. Sigh. At least I can see the mountain from the roof, when I’m up there cleaning the chimney or the gutters.

But I digress. My point was that I enjoy getting a heads-up on the day’s weather, in case some great color or cloud patterns appear. And when such goodies appear for a couple days straight, I enjoy the trend and take advantage of it. This was the case recently when a few consecutive colorful dawns got me scheming. Where could I go in the pre-dawn hours to capture something special? The Pacific Ocean is only about 90 minutes’ drive, but since our beaches face west, it’s better for sunsets. Maybe a lake? Ah, what about Hood Canal?

Hood Canal isn’t a canal. It’s a fjord that cuts deep into Washington State along the east edge of the Olympic Mountains. It’s replete with life, much of which (shrimp, oysters, clams, salmon) is eagerly exploited by recreational hunters and gatherers. And as a deep, clear body of water it’s known as one a premier cold-water scuba site.

While the scuba divers were still waking up, I was on the road. I was just a little later than planned, and feared I would be too late to catch the morning color from a good spot. It takes me 30 minutes to get to the first glimpse of Hood Canal, and before that light was beginning to streak the sky. On the plus side, there was still lots of low-hanging fog around, which always makes things more photographically interesting.

Turns out the timing was perfect. I arrived at Potlatch State Park minutes before the sun climbed over the horizon and started cutting through the fog. Just enough time to grab the camera and lenses, check my settings, and start shooting. The park isn’t really very photogenic, but it was the sunrise and not the park itself I was interested in. And the sun delivered. A few more images from a magical morning:

One Thought to “Canal Colors”